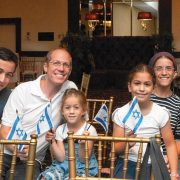 The Gore family members are among the 300 who attended the “Stop The Terror” rally at Temple Solel. (Staff photo/Orit Ben-Ezzer)

Approximately 300 people came to express their solidarity with Israel in a rally for peace titled “Stop The Terror” that took place recently at Temple Solel in Hollywood.

The rally, held inside in the main auditorium, was planned by leaders from Temple Solel and 22 mostly Broward based Jewish organizations over 72 hours as a quick response to the recent violence in the Middle East.

According to reports by the Associated Press, 10 Israelis have been killed over the past five weeks in Palestinian attacks, mostly by stabbings, and more have been wounded.

“We are involved together for a call for peace and solidarity and not to talk about politics,” said Rabbi Gideon Goldenholz of Temple Sinai of Hollywood.

The core message was that South Florida Jews feel the pain whenever terrorists attack Israelis.

“If terrorists fire bullets into the bodies of Jewish parents in the West Bank, the Jew in West Broward feels it,” said Salkin.

“If terrorists try to board a school bus to kill children in Beit Shemesh, the Jew in Boca feels it.”

“If a rabbi and two worshippers are attacked outside of a synagogue in Marseilles, the Jew in Margate feels it.”

“Why are we here? Because we Jews might be a small people, but we are a very large family,” said Salkin, applauded by the supporters.