We are pleased to announce the Rabbi Plost Welcome Fund. This fund has been established to serve as a way of welcoming Rabbi Plost, upon his arrival on July 1, and to give our members, as well as extended virtual friends of Temple Solel, a special opportunity to make a donation to Temple Solel in his honor. We want to show him, through our gifts, our appreciation and enthusiasm for his arrival and our excitement for the reinvigoration of our Temple. We hope this fund will grow to show him how welcoming and appreciative we feel about him joining our Family of Solel.

On behalf of GreenFaith and the Religious Action Center of Reform Judaism, it is our great pleasure to commemorate your completion of the GreenFaith Energy Shield! Over the past year, you have done tremendous work to reduce your carbon footprint and educate your members about the importance of energy conservation. You should feel really proud of your efforts.

It has been a joy to work with you, and we look forward to collaborating on other environmental projects in the future. We are enclosing a beautiful certificate, made from recycled materials, that showcases your completion of the program. Please share our excitement with your entire congregation; we encourage you to display your certificate proudly.

Thank you for your commitment and your dedication—you are an inspiring example for the entire GreenFaith and RAC community. 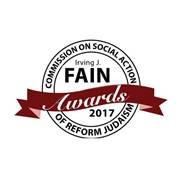 Their innovative program will be spotlighted at the URJ Biennial Convention in Boston, in December, 2017, as well as on the Religious Action Center’s website.

This is a major achievement for Temple Solel, and a well-deserved national recognition of the work of the Tikkun Olam Committee. A hearty mazal tov to them, and especially to the leadership of Nikki Glantz, Stephanie Jofe, and Scott Lewis.

The Gore family members are among the 300 who attended the “Stop The Terror” rally at Temple Solel. (Staff photo/Orit Ben-Ezzer)

Approximately 300 people came to express their solidarity with Israel in a rally for peace titled “Stop The Terror” that took place recently at Temple Solel in Hollywood.

The rally, held inside in the main auditorium, was planned by leaders from Temple Solel and 22 mostly Broward based Jewish organizations over 72 hours as a quick response to the recent violence in the Middle East.

According to reports by the Associated Press, 10 Israelis have been killed over the past five weeks in Palestinian attacks, mostly by stabbings, and more have been wounded.

“We are involved together for a call for peace and solidarity and not to talk about politics,” said Rabbi Gideon Goldenholz of Temple Sinai of Hollywood.

The core message was that South Florida Jews feel the pain whenever terrorists attack Israelis.

“If terrorists fire bullets into the bodies of Jewish parents in the West Bank, the Jew in West Broward feels it,” said Salkin.

“If terrorists try to board a school bus to kill children in Beit Shemesh, the Jew in Boca feels it.”

“If a rabbi and two worshippers are attacked outside of a synagogue in Marseilles, the Jew in Margate feels it.”

“Why are we here? Because we Jews might be a small people, but we are a very large family,” said Salkin, applauded by the supporters.

by Beverly Perkins | Our City Our Hollywood

Tikkun Olam is a Jewish concept which deﬁnes acts of kindness performed to perfect or repair the world, and to assist those who may be at a disadvantage. Although Temple Solel in Hollywood always has ongoing projects to help others, they declared a speciﬁc day eleven years ago to gather congregants of all ages to fulﬁll the action of mitzvoh (performing good deeds). END_OF_DOCUMENT_TOKEN_TO_BE_REPLACED

Not all rabbis will quote Mick Jagger or Bob Dylan in a sermon.

However, Rabbi Jeffrey Salkin, the new spiritual leader at Temple Solel of Hollywood since Aug. 1, has built up a national following by writing twelve books and having a blog he writes on contemporary topics titled “Martini Judaism for those who want to be shaken and stirred.”

“I am fond of Bob Dylan’s music. I am particularly devoted to the music of Leonard Cohen, who writes songs that reflect a deep sense of Jewish spirituality,” said Salkin.

“It’s not just Jewish rock musicians. I greatly appreciate that the Rolling Stones played a concert in Tel Aviv this past year. Mick Jagger even spoke Hebrew to the audience. Good for the Stones for defying the cultural boycott of Israel.”

“I am honored to work at Temple Solel because it is a multi-generational community. I have discovered a deep hunger and interest in learning. My job is to continually try to light and fan those flames,” said Salkin.

“We are thrilled to have Rabbi Salkin as our senior rabbi,” said Joseph Stadlen, president of Temple Solel. “His enthusiasm, spirit and approach to teaching will resonate well with our congregation and we look forward to continued learning of the Jewish religion through his wisdom, knowledge and experience.”

Salkin’s range of topics written is broad, with articles written on masculinity and Judaism, spirituality of work, interfaith relations, Jewish history with articles published in “Washington Post,” “The Wall Street Journal,” “Readers Digest” and “The Forward.”