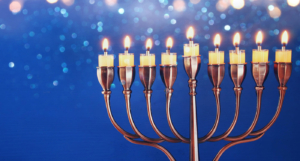 Chanukah, or the Festival of Rededication, celebrates the rededication of the Temple in Jerusalem after its defilement by the Syrian Greeks in 164 BCE. Although it is a late addition to the Jewish liturgical calendar, the eight-day festival of Chanukah has become a beloved and joyous holiday. It is also known as the Festival of Lights and usually takes place in December, at the time of year when the days are shortest in the northern hemisphere.